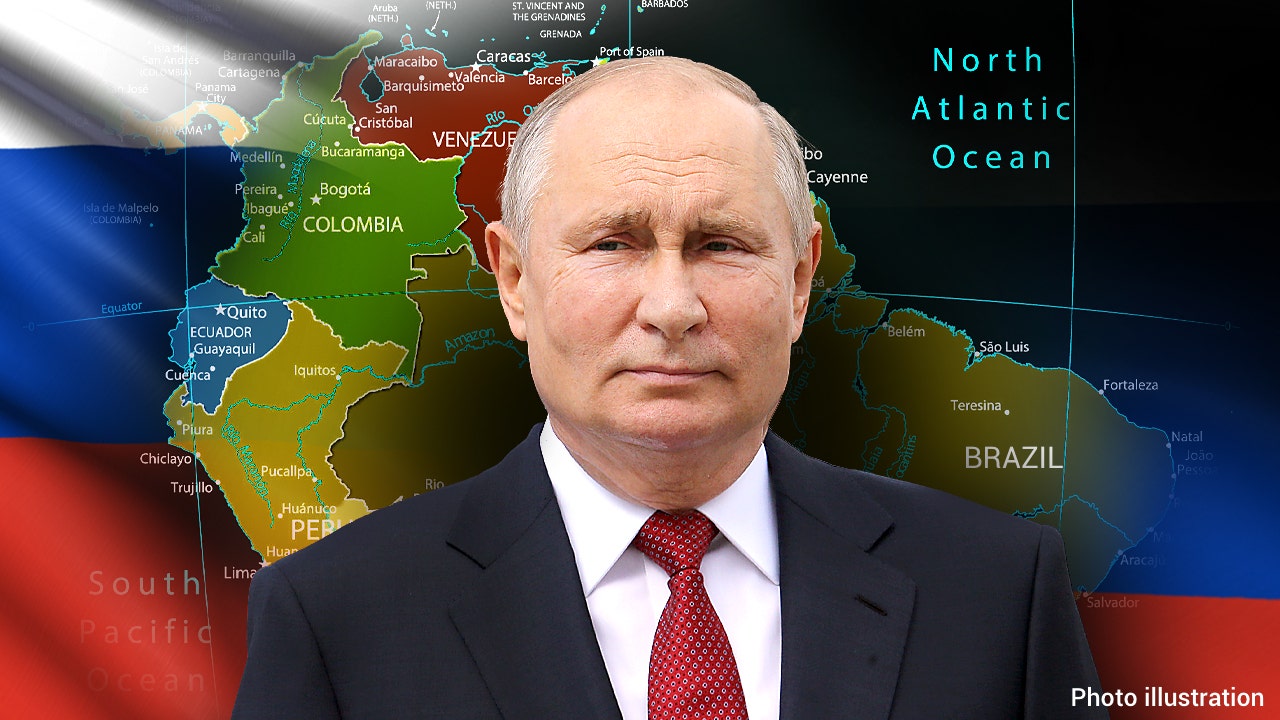 EXCLUSIVE: Colombian President Iván Duque Márquez condemned Russia’s “most brutal genocide” in Ukraine, and also warned that other autocracies are interested in disrupting democracies around the world, in order to attack and dismantle values that make democracies strong.

President Duque spoke with Fox News Digital during an exclusive interview Thursday ahead of an event hosted by Colombian Ambassador Juan Carlos Pinzón celebrating 200 years of diplomatic relations between the U.S. and Colombia.

The Colombian president condemned Russia’s deadly invasion of Ukraine, warning that a regime that kills children, bombs hospitals and commits other atrocities must be sanctioned by the “whole world.”

Russian President Vladimir Putin smiles during the ceremony marking the Flag Day in front of the Victory Museum at Poklonnaya Hill, on August 22, 2021, in Moscow, Russia. Russians marks the Flag Day since 1991.
(Photo by Mikhail Svetlov/Getty Images | Istock)

“Russia has activated maybe the most brutal genocide that we have seen in recent history against the Ukrainian people. So that is a threat. When you have a regime that is just willing to do whatever it takes just to win a part of a territory or to conquer a territory, and that employs killing children, using landmines, bombing hospitals — that clearly has to be sanctioned by the whole world,” he said.

“So I don’t refer to this situation as a conflict or as an invasion or as an attack or as a war. This is genocide. And I think we all have to raise our voices and our countries need to apply all the sanctions that are needed in order for Vladimir Putin to take the lesson and hopefully that he will be tried someday as a war criminal,” continued Duque.

When asked by Fox News Digital about the malign influence coming from Russia and other autocratic states into Latin America, Duque responded that there are some countries are seeking to “dismantle the values” of democracies similar to those in Colombia and the United States.

“My take is we have to defend democracy. And as I have said in many ways, democracy is like health. When we have it, we take it for granted. When we lose it, we [want] to claim it back desperately. So I think we have to understand that there are countries around the world who are interested disrupting democracies elsewhere. And in the case of Latin America, democracies have been threatened by three phenomenon that it may have been very well described by Moisés Naím in his latest book [on] “the three Ps” – populism, post-truths and polarization. And some of that sometimes comes with the influence or the attacks from other countries that clearly want to dismantle the values that have made our democracy so strong,” said Duque.

The Colombian president explained that bad actors are working to specifically influence elections and “generate chaos,” in an attempt to weaken the core institutions that set democracies apart from other systems of governance.

“So we have to denounce whether there are people trying to influence the democratic elections, whether there are people trying to create a blasting campaign against institutions or just trying to generate chaos. So we have to clearly work on cybersecurity policies that allow us to detect phenomenons like the one that took place in the United States in 2016, and that has taken place in other countries around the world, in order not to allow other countries that want to manipulate elections other benefit,” Duque told Fox News Digital.

It has been proven by the Department of Justice and Congress that Russia attempted to influence the outcome of the United States’ 2016 Presidential Election through a campaign of disinformation and by sowing political division on social media platforms.

Duque also discussed the ongoing discussions to re-negotiation the Iran Nuclear Deal, saying that any deal to deter Iran from developing a deployable nuclear weapon would be beneficial to the region, due to the fact that Iran is active in South America, particularly in Venezuela through terrorist organizations.

“My opinion is that the [International Atomic Energy Agency] IAEA has been requesting for many years to have a transparent and traceable mechanism of supervision and any way forward on an agreement that is able to deter Iran to enrich uranium and build a nuclear weapon. Well, I think we have to celebrate it. And maybe if I could use the phrase that Ronald Reagan used to use is, yeah, you can trust, but you have to verify. And I think so far there has been a lot of trust, but I think we haven’t had the verification enough to clearly ensure that Iran is not going to enrich uranium and create a major world threat,” he told Fox News Digital.

The president continued to say that Iran’s “strong relationship” with Venezuela is concerning due to the presence of terrorist organization Hezbollah’s cells in the country.

Russian President Vladimir Putin chairs a meeting on the country’s transport industry via a video link in Sochi, Russia May 24, 2022.
(Sputnik/Mikhail Metzel/Kremlin via REUTERS)

“[Iran] has a strong relationship with Venezuela. We have a diplomatic relation with Iran. But we have said that we have to clearly denounce the presence of Hezbollah cells in Venezuela. So any country that supports Hezbollah is a country that is clearly violating [United Nations Security Council] Resolution 1373 that was issued after September 11, 2001, where no state can provide harbor or safe haven to terrorist groups,” he said.

“So it’s clear that some of these countries have been maybe looking to the other side, being flexible or supportive and with this kind of organization. And we have to be clear that even though we may have diplomatic relations, we just can’t stand that that relationship with terrorist organizations takes place.”

Duque also praised the United States’ strong diplomatic partnership with Colombia for over 200 years, which he called a “long relationship based on principles and values,” also noting that the two countries “have demonstrated that with law and order, we have dismantled the most brutal terrorist organizations.”

The president plans to attend the Summit of the Americas in Los Angeles, California next week.

He told Fox News Digital that at the summit he plans to focus on migration, climate change solutions and economic reactivation coming out of the COVID-19 pandemic.