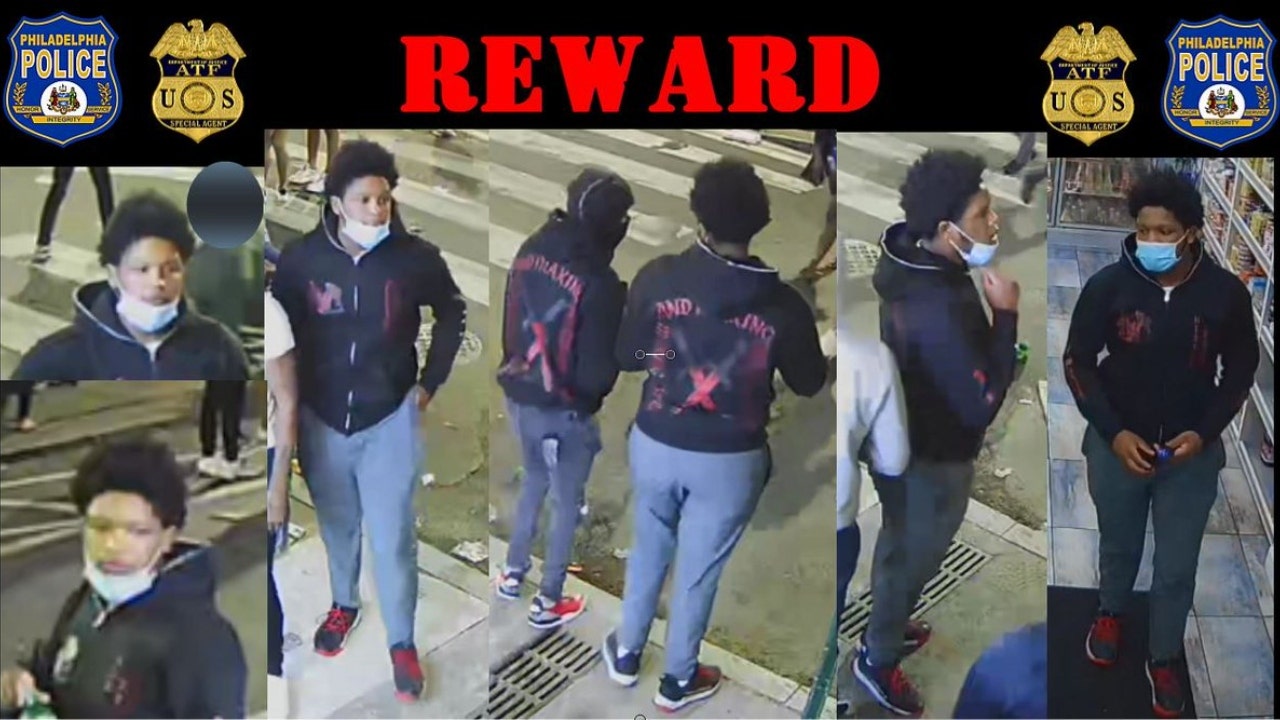 Philadelphia and the Bureau of Alcohol, Tobacco and Firearms (ATF) are offering a total $30,000 reward for information leading to the arrest of a person of interest involved in a Saturday night shooting that left three people dead and 12 injured.

Police describe the person of interest as a Black male in his late teens, tall and heavy set, with a light to medium complexion and bushy hair. He was wearing a black sweatshirt with distinctive, red marks in security camera footage obtained by police.

Philadelphia is offering a total $30,000 reward for a person of interest in Saturday’s mass shooting.
(Philadelphia Police Department)

“The individual pictured is wanted in connection [with] the mass casualty shooting incident that occurred on 6/4/22,” Philadelphia police said in a Tuesday tweet. “He should be considered armed and dangerous.

Video footage apparently shows Garner shooting toward the area where the initial conflict was taking place between the victims. It was then that Philadelphia police officers fired at Garner, injuring his hands. He’s currently at Thomas Jefferson University Hospital, undergoing surgery for his injuries.

Krasner said earlier Monday that at least four guns were involved in Saturday night’s gunfire on South Street in central Philadelphia, and it’s possible more firearms were involved. Police said evidence indicated that five guns were involved, two of which were recovered. Two of the three original participants had a permit to carry guns, while one did not, Krasner’s office said.

Police said 34-year-old Gregory Jackson, 27-year-old Alexis Quinn, and a 22-year-old man who was not identified were killed. Investigators believe one of them was involved in “a physical altercation” with another man, and those two began firing at each other, with both struck by gunfire, one wounded and one killed, authorities said.

The other two people killed and a number of those wounded, who ranged from age 17 to 69, are believed to have been innocent bystanders, said the city’s police commissioner, Danielle Outlaw. Mayor Jim Kenney called the shooting “beyond devastating.”

Surveillance video from local businesses showed a stampede of people fleeing as the gunfire broke out. Police were seeking images from businesses to try to identify suspects. Police are also investigating several other shootings, one fatal, in the same area or nearby to see whether they might be related, officials said.

Authorities are asking anyone with information to contact 215-686-TIPS.

Fox News’ Bradford Betz and The Associated Press contributed to this report.

Audrey Conklin is a digital reporter for FOX Business and Fox News. Email tips to audrey.conklin@fox.com or on Twitter at @audpants.